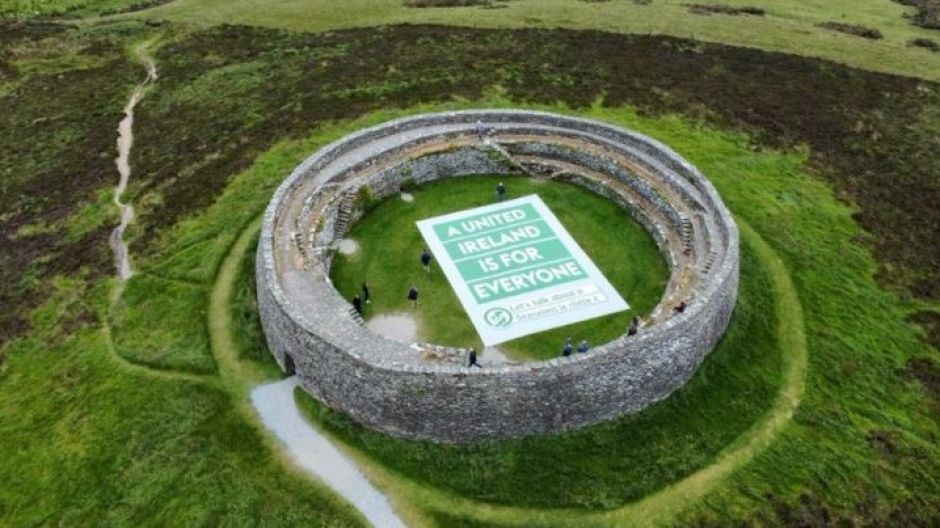 An incident the place a big Sinn Féin banner was unfurled at a State heritage website to be used in a political video has been referred to the gardaí.

Patrick O’Donovan, Minister of State for the Office of Public Works (OPW) – the company which manages the positioning in Co Donegal – condemned the incident as “completely inappropriate”.

The banner, which mentioned “A United Ireland is for Everyone – Let’s talk about it”, included Sinn Féin’s emblem and was positioned on the centre of the Grianán of Aileach ringfort in Co Donegal, with a video shared on social media.

An identical video featured the Hill of Tara in Co Meath, although whether or not a banner was really positioned there or whether it is footage of the heritage website that has been altered to incorporate the banner is unclear.

The OPW operates each websites and its coverage doesn’t permit their use for selling political messaging. It says it has contacted Sinn Féin asking it to discourage such behaviour in future.

Mr O’Donovan mentioned: “The use of Ireland’s national monuments and heritage sites for political purposes is completely inappropriate and this incident should not have occurred.”

The Fine Gael Minister added: “The OPW’s guidelines are clear that no filming of a political nature is permitted and the matter has been referred to the gardaí.”

A Sinn Féin spokesman mentioned: “The members involved were not aware of any restrictions in place in relation to photography at the site. The local organisation has been notified of these.” He didn’t make clear if an actual banner had been positioned on the Hill of Tara or whether or not the it was an altered picture of the heritage website that was circulated on-line.

An OPW assertion mentioned: “An Garda Siochána are conscious of the incident at Grianán of Aileach.

“The OPW are not aware of any persons placing a similar banner at the Hill of Tara. The image in a tweet currently in circulation may be a stock image of the Hill of Tara which has been altered to include the banner.”

It additionally mentioned: “There is a long-standing OPW coverage in place that such websites shouldn’t be used for any type of promoting or promotion, together with political messaging.

“A review of permissions applications indicates that permission was not sought or issued for this activity.”

The assertion mentioned: “This Office has no data on the people who positioned the banners on these websites, however the emblem of a political social gathering was seen in each pictures.

“The OPW has written to the party and has asked for any assistance it could give in discouraging such behaviour in future in order to prevent others following this example and to protect heritage sites from the added risk of being damaged in some way.”